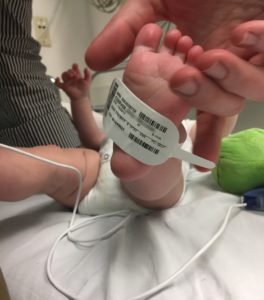 “Hi Melanie,” she said. “I was just speaking with your husband about your son. I want you to know…” Nurse Daphne wanted me to know that she was an emergency care nurse, that her specialty was pediatrics and that she had over twelve years of experience. I would have never questioned her credibility; I was too desperate for someone else to adult. I will say that the ‘twelve-years experience’ fact did catch me by surprise because Nurse Daphne sounded like the nicest, most midwestern-widow-neighbor-lady you could ever come across. I would’ve expected her to have thirty years of nursing experience, based on her voice. I also could easily hear her teaching a meditation retreat and/or performing phone sex (not trying to be weird, it’s just the truth).

“So,” Nurse Daphne soothed. “Tell me what happened.”

I told her that Frog had rolled off the couch and hit the back of his head on the coffee table. I told her how I held him and he cried for, “more than five, less than ten,” minutes.

“Did he loose consciousness?” she asked.

“No,” I replied quickly.

“Uh, I think so,” I said, shakily. I looked closely at Kermie. He was sitting in his baby seat on the floor and smiling. Frog was smiling and kicking and happily dancing along to the Baby Einstein episode on YouTube. And he is totally fine. I can see for the first time since the whole incident that my Kermie is 100% totally and completely fine.

“Ok, that’s good. Everything sounds good,” Nurse Daphne says. “Now, I do need to ask you a series of questions and some of them are scary. Ok?”

And she was right. They were scary.

She asked again if he’d lost consciousness. She asked if he was trying to fall asleep. She asked if Frog had a seizure. She asked if there was any clear liquid leaking out of his ears or his nose, “It looks very different from snot. You’d know if it was there,” she advised, sagely.

But we–Kermie and I–we were acing this test. “No,” I answered over and over again. And Nurse Daphne’s concern was lessening too with every correct answer, I could hear it. Finally, something we were good at! And right from the beginning!

“Ok, this is all great news,” Nurse Daphne said. “So finally, I need you to tell me the specific location of where his head hit the table.”

“Yes. Ok,” I sat down on the floor and pulled a reluctant Frog out of his bouncy seat and into my lap. “I’m looking at the back of his head right now. I can see a red mark on the right side of his head.”

“Is there any swelling?”

Is there any swelling…”Maybe? A little? But it’s not sensitive to the touch. I just tried touching it and he didn’t even flinch. He’s acting totally normally,” I said confidently.

“Ok,” Nurse Daphne said definitively. Time to get our official grade. It would be an A, I was sure. “Ma’am,” she began. “I need to tell you that because of the location of the hit the safest and best thing for you to do is to call 911 and have an ambulance take your son to the emergency room.”

So, um–we didn’t pass the test. We failed the test. And because of that we were headed to the hospital. In an ambulance. And I did exactly what you think I did. I panicked for the second time.

Things are going on behind the scenes. Good things, I promise. Many, many good things. And these new developments and changes need a little time to sort themselves out, time for me and us to adjust, time for The Cat and The Dog to lay around looking pretty and judgey.

So this means that Part 3 will have to wait until September 4th. But don’t worry! Let me assure you that the son Frog is still odd, I’m still neurotic, and Sean is still…still…well, whatever Sean is, he’s still is. And he is doing it very handsomely, I might add. And with a rather large beard (stay tuned for photographic evidence).

And finally, if you’ve made it this far, I sincerely thank you. Sharing all the crazy makes my world go ’round.

As a ‘Thank you,’ to his adoring public, Kermie has promised subscribers ONLY a special, weekly photo. Should you want to take advantage of this extraordinary opportunity (he is quite the benevolent Frog), please subscribe below: