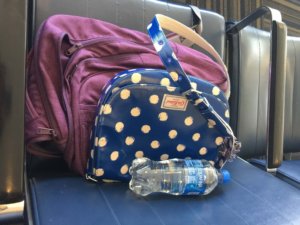 The gynecologist looked at me and squinted. It was my six-week, postpartum check-up and the physical exam had gone well. Did I have any questions?

"It should go away, with time," she said, nodding. "You know," she said sagely. "Some things will never be the same."

I watched, perplexed, as my sorority sister Dahlia* stooped next to the hotel bed, her iPhone held to her face. She began slowly shuffling around the perimeter of the mattress.

"What are you doing?" I asked.

"Bed bugs," she stated. Ah. I should have known. We had talked about bed bugs in the car, on the way to the hotel.

"They had to treat the library at the school," Dahlia had informed me.

"The library? For bed bugs?" I asked.

"Yeah. Some kid put a library book on his bed and the bugs got into the spine of the book and then he returned the book. The bugs got into all the books." She shuddered.

Dahlia and I are sorority sisters. I met her during my first few weeks at Oglethorpe University in Atlanta. She was an upperclassman, nice and funny and I attached my freshman self to her and two other upperclassmen--Kal and Leslie--about as completely as a leech attaches to it's host.

The last time I'd seen any of them was in January, when Dahlia, Kal and Leslie surprised me at Frog's baby shower. But this weekend, it was Kal's turn to be surprised; Dahlia and I had secretly planned for months to attend Kal's daughter's birthday party that Saturday. And Kal had no idea we were going to see her the following day. This was going to be great.

"All clear," Dahlia said, declaring the mattress officially bug-free and plopping herself down. "Oooo," she said on second thought. "Pj's! I'm gonna change into pj's."

"Ok, we'll go get food." Dahlia slowly stood up. "But after pj's." Because priorities.

It was late, around ten o'clock at night, by the time Dahlia, donned in a bright yellow pair of pajama bottoms, and me, still dressed in my black airplane yoga pants, went to find food. Our hotel was just down the street from my childhood home in Roswell, Georgia (a northern suburb of Atlanta) so finding food should not have been difficult but it was. It had been a full ten years since I'd lived there. It all looked familiar but strange. I felt like one of those Lego-people that had just been inserted into this grand Lego-castle that I didn't help build.

Swarms of twenty-to-fifty-something bar-goers filled the street. A live band played loudly through the large, open windows of a bar and I could see dancing, gyrating bodies, waving their hands in the air like they just didn't care. There were lights and laughter and drunk-person yelling and drunk-person kissing and I was mesmerized.

"It was never like this when I lived here," I said in awe.

"Wanna check it out?" Dahlia said.

"Sure." Dahlia turned and slowly drove down S. Atlanta Street as I stared, agape, at easily the coolest place I'd been in years. I had forgotten what it was like. I'd forgotten how a Friday night out could feel.

"I just saw Kal!" I exclaimed.

"Coming out of that restaurant back there," I said, pointing. "I saw Kal! It was her! I saw her"

"Oh my God," Dahlia's eyes got wide and her hands gripped the steering wheel in excitement. "What do we do? Do we wait until tomorrow?"

Dahlia pulled the car around and squealed when she saw Kal. Kal was walking with a group of men, her husband and two brothers, and a girl with glasses I had never met. We scuttled past an unsuspecting Kal and turned into a dimly-lit parking lot she was headed toward.

"Do we just get out and wait?" I asked Dahlia. We really hadn't thought this through.

"Yeah," she said, springing from the car. And so we stood, surprised by our own surprise, and waited. Awkwardly. We awkwardly waited for Kal to appear. It felt like it was taking her forever.

"Where are they?" I whined. And then, finally and not awkwardly, Kal turned the corner and we saw her. And she saw us, screamed, and ran full-speed right for us.

"I can't believe you're here!" Kal screamed. "Reed*, did you know about this?" Kal looked over at her husband, Reed.

"Yeah," he replied with a sly smile. He looked at Dahlia and I. "But I thought you guys were going to go to bed?"

"We got hungry," Dahlia said. "So we went looking for something to eat."

"I can't believe you guys are here!" Kal screamed again, stomping her heeled feet and happily wiggling. We began to breathlessly catch-up, telling Kal all about the ins-and-outs of how we planned the surprise and then how the plan got blown-up the moment we saw her and--well. Um, at some point, I became aware of something odd. A wetness. Specifically, I became aware of an extreme wetness on my yoga pants.

I dismissed the wetness at first, I was just being weird, I thought. But...but the wetness persisted. And my mind began racing. Surely, surely, I did not just wet my pants.

So there I stood, watching Dahlia and Kal, some of my best friends on the entire planet and I, I suddenly couldn't speak. I was frozen. What the fuck.

"Um, guys," I finally said, motioning to Kal and Dahlia. "Sigma conference?" I pointed to a spot away from the male company and they scurried over.

"Lemme check," Kal offered putting her hand in the air. She bent down and placed her hand on my pants. "Yep, that's pee," she said. "You need to do your Kegels Mel!"

"Melanie's just peed," Kal said as casually as she could.

"The jumping..." I stammered. And then, everyone tried to make me feel better about it. We tried to normalize peeing on yourself as an adult. We were making jokes. We would change the subject and then go straight back to me and my urine-drenched yoga pants. And look, if you have to wet your pants, this was the way to do it; with people who love you, in black pants, and at night in a dim parking lot. But I started to feel a nagging sense of panic and shame bubbling up inside me.

"Ok," she said. But the discussion continued, simply because, I mean, how do you not talk about it. And suddenly, me getting out of my wet pants felt like an emergency.

"Dahlia." I'm desperate now. I'm about thirty seconds away from a breakdown. "I need to go back to the hotel," I plead.

"Right, ok, let's go," Dahlia says. And we say good-bye, assuring Kal we'll be right back after I change.

"Do you have anything I can sit on?" I ask weakly. Dahlia hands me a reusable Whole Foods grocery bag from her back seat. I carefully place the bag down on the passengers seat and I sit. And as Dahlia pulls the car out of the parking lot, my face drops into my hands and I sob. I sob and sob amongst the beautiful party people of historic Roswell, Georgia.

"I need to FaceTime Sean." We'd just arrived at the hotel and my sobbing had changed to more of a periodic weeping, thanks to Dahlia talking and petting me (literally, petting me) down from the shame ledge.

I called and after a few rings, the black of our master bedroom filled my screen. "Baby?" Sean murmured, sleepily.

I could hear rustling and then the light flipped on and I could see my Sean, trying to focus his sleepy eyes. Tearily and in gasps, I told him what had just happened. Dahlia resumed the literal petting.

"Well," Sean said after I got the whole story out. "I don't know what to say. You know, I always prefer to be with you when these things happen."

"But you've got Dahlia there. And she's great."

"And hey!' Sean said a few minutes later. "Sounds to me like you have your next blog post."

I laughed. "I guess so," I said. I could finally see the glimmer of humor through all the embarrassment. And yes, I was still in the damn pee-pants but oh my God, this was funny. Like so funny.

"And hey, don't hold anything back on that blog post," Sean advised, his eyes twinkling. "Let it gush forth from you."

"No really, don't just let it trickle out..." Dahlia let out a cackle.

"Ok. Love you!" Sean said, chuckling and pleased with himself.

"It feels weird to be out, right?" Kal said as we clutched hands and climbed the stairs at the bar Mac Mcgee's together. I was showered, in new pants and ready to properly catch up with Kal.

"I remember exactly how that was," she said. "After Issie*, it was so weird." She hugged me and I was so glad to be with friends. And out on a Friday night.

Epilogue: So this was the first but unfortunately not the last time I've unknowingly peed all over myself. I am happy to report that I did not have another accident that weekend home and again, if it had to happen, I'm glad it happened then, and not at Issie's superhero trampoline birthday party (yeah, that could have been bad).

And also, until this happened, I strangely had no idea that incontinence, in varying degrees and forms, is quite common postpartum. And get this: There is physical therapy for it. I know, right? Right?!? So pelvic floor physical therapy is my plan moving forward. Because, to quote my gynecologist, "Isn't having babies fun?!?"

As a 'Thank you,' to his adoring public, Kermie has promised subscribers ONLY a special weekly photo. Should you want to take advantage of this extraordinary opportunity (he is quite the benevolent Frog), please subscribe below:

2 thoughts on “Some things will never be the same.”