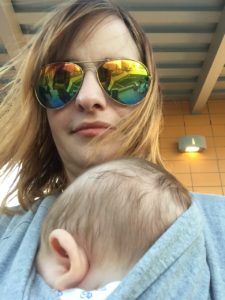 Frog is my first biological child and not at all what I expected; a mercurial homebody that looks like a sixty-five-year-old man and grumps like one too. That sounds cute but out in the wilds of the real world, it’s caused some problems. See, the tricks that work on other babies don’t seem to work on my Frog. Coming at Frog with normal, Oh! He’s so cute!, baby excitement is invariably not going to illicit a smile. Shaking his foot or high-pitched cooing will also not be appreciated as well as calling his name or performing anything resembling a dance. It feels like my Frog constantly disappoints and worries people which makes me worry too.

We, my husband Sean and I, worry a lot. We spend a lot of time discussing different theories as to why our Frog is so quirky. We wonder, is he an old soul? We wonder, is he autistic (do not Google early signs of autism by the way)? Or sensory issues, could it be that? Does he have a tongue tie? Is he just teething? But our favorite theory is that he’s just smart. Like really, really smart. Frog must be a super advanced six-month-old who is just way too busy thinking genius thoughts to care about the lady at Target who thinks he’s cute. And of course, all of this will be clear once he can talk, which will obviously be soon and obviously in complete sentences. And our Frog will bequeath us with his wisdom; the cure for cancer or how to achieve peace in The Middle East is probably stewing in Frog’s brain this very moment. Yes. Yes, of course, that must be it. Frog is just a Bequether with a capital ‘B.’ Maybe that’s the reason there’s no other baby like him at storytime. Or swimming. Or at the mall. Or at the park. Or–

So, parties. Parties plus Frog equals July 4th, 2017. Everyone is coming over because our house is the best place to see the fireworks. My oldest step-daughter has made trifle and I’ve decided that my Weight Watchers points will not be docked for said trifle. Or for the mojitos. And certainly not for the spinach dip. A joyous occasion it should be except Frog. Frog has high-jacked the party with loud, almost hysterical crying. He is in such a state that almost no one can approach him which means the grandparents that have gathered are, um, disappointed. I’m shuffling him from our bedroom out to the kitchen over and over again. He is strapped to my chest via the K’Tan baby carrier and trying to keep him moving and settled has become my number one priority. But Frog will have none of that, this settled business. His 17 pound body is hot with upset and outrage and my shoulders are feeling the exact same way.

His 97-year-old Great Ma is watching all the Frog shuffling from the couch in the living room. She can see both the kitchen and the bedroom and she’s constantly wringing her hands, waiting and hoping for the noise to die down so she can get a chance to hold Frog. She remembers holding him when he was so small, ‘a tiny little thing’ she says, holding her hands so close together that it seems that she remembers newborn Frog as no bigger than a grapefruit. But she is desperate ‘to get her hands on him’ because she doesn’t know if she’ll ever get the chance again. That’s what she tells me later that night, from the same spot on the couch but now, she’s swaddled in a blanket up to her chin. Great Ma plans to watch the fireworks on TV in the living room while the rest of us watch from our rooftop deck. The stairs are just too much for her at this point. I ask her if she wants company; Frog actually went to sleep some time ago. Great Ma says no, that I should join the rest of the family on the roof and she tells me not worry about her, it’s just that she can’t do all the things she wants to do anymore. Then she kisses me and tells me she’s liked me from the first moment she saw me. She has tears in her eyes and her chin is quivering and she then asks me to think of her when she’s gone. Of course I will. Of course I will think of Great Ma when she’s gone. And then, she tells me she’s not ready to go yet and abruptly shoos me up to the rooftop deck.

Frog’s grandmother, who is also desperate to hold him, has specifically worn a t-shirt Frog has previously drooled and dive-bombed all over. He likes patterns. Sometimes. Anyway, she would get to hold him but not because of her t-shirt; Frog cared not at all about what she was wearing because, well, who knows. But her chance came about an hour later, when my husband Sean (the cook) hadn’t gotten a chance to eat but it’s Frog’s bath time which means all hands on deck. Must keep that Frog on a schedule because The Schedule will save us. Right. So Frog’s grandmother will get quality time with her grandson by stripping him naked. He screams the whole time. She hands him to me red-faced. I bathe him as he screams. His grandmother tries to make the best of this snatched time and smiles through the whole affair. She is the only one smiling.

True confession: I thought I could conjure a calm baby. Really. When I was pregnant, I tried to not obsess, I worked to let worries go because I didn’t want my unborn son swimming around in all my stress hormones. Once he was born, I claimed victory. I described him as ‘chill’ to anyone who would listen. Over and over again I would state this indisputable fact. Even while he was having a meltdown. But at some point, probably around the fiftieth meltdown with different grandparents, I had to finally admit what I deep down already knew. No, no, I did not and do not have a chill baby and that yes, I had lied to myself and others for so long because I was scared. I was scared that Frog would be labeled ‘difficult’ like me. I didn’t want that for him. I didn’t want that for me. I didn’t want that for the lady at Target.

Later that Tuesday July night, once Frog had proved, again, to be diff—spirited. We will call Frog spirited. So after everyone had left and our Frog was (finally) asleep, I was getting worked up, anxious about the following day. The long weekend had been nice, a small reprieve from the relentlessness that is taking care of a small child alone, but the weekend was coming to an end. “It’s Wednesday tomorrow, so we have baby swimming,” I said, warily and with an eye-roll.

“I thought you liked baby swimming?” Sean said, genuinely surprised to hear my dread. Remarkably, I had been able to keep myself together through this whole evening of crying and stress and family, but here, with Sean’s casual comment, his comment almost sent me into my own meltdown. But I didn’t. Instead, I took a moment. I gathered myself for the one-hundredth time that night, and thought, in utter disbelief, How could he not know? How could Sean—my tell-everything-and-leave-nothing-out person—not know? And then, and only then, did I loose it. I told him everything that sucked about baby swimming. I ranted, I cursed, I pointed out small details about the dressing rooms, the other moms, the culture of the place, all things that on the surface seemed inconsequential but were actually massively and critically important, obviously. I left nothing out. And at the end of it, my husband looked at me and said, “Babe, that’s golden. You must write all of that down.” And I decided then that he was really right, that I should write it all down. I should just blog it all. So. Here I am. Blogging it all.

Frog would like to say, ‘Thank you’ to his adoring public. Therefore, he is promising subscribers a special, weekly photo. Should you want to be graced with Kermie’s presence in your inbox once a week, please subscribe below:

*Frog is not my son’s name, it’s his nickname. I also call him Kermie after Kermit the Frog and I am aware that some people may not be fond of this nickname. But I’m Da Mama. And he’s My Frog. That is all.

4 thoughts on “When you decide to blog it all.”