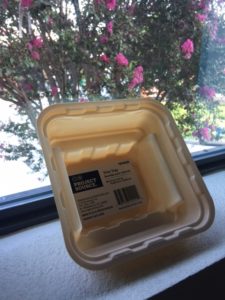 At our house, the path to an Amazon package is lined with broken glass. Really.

See, our front gate has been sealed shut since the weather turned warm. This means that to check the mail or get a package, I must walk through the garage, down the driveway, around the trash cans (stay with me), into the street littered with shards of glass (I told you), around the pink crepe myrtle tree to our front gate (phew!).

And three weeks ago, when I was making my way through the Amazon package gauntlet, I spotted something unusual in the street: Eyes. A pair of wide, baby-bird eyes were staring at me just beyond the broken glass. The bird was silent, fluffy and young, frozen as he looked at me. I squinted. He didn’t look hurt but he didn’t look particularly able either. I glanced around. No cars coming. I looked up into the tree. No mother. Where was this baby’s mother? I looked back at the tiny bird and then, looked up again. Like really, where was Birdmom? Surely this baby can’t be alone. He’s too small. He’s too helpless. He’s too cute. He needs help.

I looked at the baby in the street and took a tentative step toward him. He hopped away awkwardly, further into the street, and then I panicked.

I ran back through the crunchy glass, around the trash cans, up the driveway, into the garage and grabbed the first container I could find (a small plastic paint container, see photo) and I rushed back out to the baby bird. He was just where I left him, still in the street, but this time, I had a plan. The plan was to get the baby into the plastic paint container so he was safe and out of the street, and then to go get my husband. And then Sean would save the baby. He would know what do to, I was sure.

This time, I confidently moved toward the baby, armed with my paint container and this time, he squawked. And that’s when Birdmom arrived and attacked. I was attacked by Birdmom.

So here’s the thing about Birdmoms: Birdmoms are scary. And loud. And persistent. So I placed the plastic container over my head as makeshift helmet and tried to reason with her, mom to mom. I apologized, shouting that I was just trying to help, I wasn’t going to hurt him, it was just that he was in the street and–oh. Oh. I suddenly realized that I had an audience, a human audience. Two cyclists across the street, pedaling very slowly and gawking, because…because, well, I can only imagine what I looked like. That’s when I decided it was time to go get reinforcements aka Sean. But not without the Amazon package.

So I dashed through the Birdmom onslaught, grabbed the Amazon package, and ran the rest of the path as fast as I could. I managed to make it into the house physically unscathed, despite having a Birdmom escort most of the way.

“No!” I said, barreling up the stairs (our home is townhouse-style) and Sean and seven-month-old Frog* met me half-way. They both stared down at me with a combination of concern and fascination, almost like I was a crazy woman dancing in the middle of the street, which, umm…So. There are times when I am truly startled by how much Sean and Frog look alike. And it isn’t just the physical (although that’s a big part of it). It’s the way a thought comes through them that’s the same. And this was one of those times. And for the one-thousandth time since I gave birth to Kermie, for a brief moment, I wondered if Frog would ever look anything like me.

“There’s a baby bird in the street,” I said, panting and pointing and trying to catch my breath. “I tried to get him out of the street but his mom, she wasn’t anywhere the first time but she was there the second time, and she just attacked me. But he’s in the street, the baby. We have to help him. He’s just a baby, he can’t fly yet,” I explained.

Frog and Sean are still looking down at me but their expressions have changed. They still match each other but I see a sadness that hadn’t been there a moment before.

I furrowed my brow. I was confused. Why wasn’t he moving? Didn’t he see that we had to go help? We had to get going. The baby was in the street. “We have to go help him! He fell out of the nest!”

“The mom might have been the one who pushed him out,” Sean said. Kermie looked away from me and suddenly, I knew why Sean wasn’t moving. And why there was sadness. And I looked at my human baby, Frog, and my eyes filled up with tears.

“Right,” I said, trying to steady myself. “Right.”

My bedtime ritual took longer than usual that night. I kept adding tasks. I even considered flossing (which is something I only do the week before a dental appointment).

Sean was in bed already. Usually, he playfully whines about how long I’m taking, but on this night, he was quiet, so quiet that I wondered if he was already asleep. When I finally decided that there was nothing else to be done, I went to climb into bed.

“Do you want my spot?” Sean asked in the darkness from his side of the bed.

“Yes,” I said. He rolled over to my side and I climbed over to his. His spot felt warm and safe and smelled like him. “That bird really got to me,” I whispered.

“I know,” he said, putting his arms around me.

Frog would like to say, ‘Thank you,’ to his adoring public. Therefore, he is promising subscribers a special, weekly photo. Should you want to be graced with Kermie’s presence in your inbox, please subscribe below:

*Frog is not my son’s name, it’s his nickname. I also call him Kermie after Kermit the Frog and I am aware that some people may not be fond of this nickname. But I’m Da Mama. And he’s My Frog, soooo that’s the deal.

1 thought on “Where is your mother?”